A prime understanding is needed, the 10 Commandments were not given to all of mankind.

The Romans stole the Hebrew Scriptures from Israel and then later on attached their book to the Hebrew Scripture, this furthers their agenda for mass control, controlling the nations along with the Jewish nation. This has been successful, how so? Even people who do not claim to be Christian use their terms in describing different actions of people and believe Jesus gave the Golden rule among other things stolen from the Hebrew Scriptures.

The Hebrew Scriptures never belonged to the world at large, they were given to Israel from their God. The attachment of the Roman book to them has done its job in confusing and controlling the way many think.

Lets look at a very important point that is found in the beginning of the 10 commandant as they appear in scripture and in what I call the Christian 10 Commandments.

Exodus 20:1-2a
And God spoke all these words, saying: I am the LORD thy God, who brought thee out of the land of Egypt, out of the house of bondage. http://www.mechon-mamre.org

And now look at the photo of a set of 10 Commandments that is commonly found within Christianity. 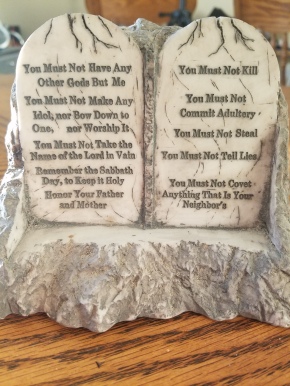 When one examines a listing of the 10 commandments from the nations you will find something missing and that is the statement in whom God gave them to. The nations nor their religions were freed from Egypt. Those who stole them hides this fact to deceive many and lead them into their brand of religion.

Another fact about the 7 Noahide Laws is, today we only know of them from the Scriptures that God gave Moses at Sinai and was told to give them to Israel – thus even making the laws of the nations under Torah/Israel jurisdiction; meaning they have the authority to not only teach them to us but to teach us their proper interpretations.

Those who view the 7 Laws in a secular way and want to self interpret them, is no different then what the Romans did to the 10 Commandments. Even though they are for us they are not for us to take and use according to our own understanding. This could even fall under the law of theft. Once they were given at Sinai they became under the covenant and instruction to Israel.

I know it’s a hard pill to swallow but it is the plain truth of the matter. This very point has been one that I have had to grow in understanding. I knew in part but once I came to understand that the 7 Laws were under Israel jurisdiction this opened up for me to understand many other aspects of the 7 Laws.

Even the Prophets tell us that the nations will turn to the Jew to learn about God, we are not to learn of Him on our own – When that happens you end up with situations like the Flood, Nineveh, Sodom and so on. And then you have a plethora of man-made religions scattered all over the earth. Even with Nineveh God sent a Jew to give instructions to a gentile city.

Now on to a foundational teaching of how we get the 7 Noahide Laws from the Hebrew Scriptures.

What I show next is from The Noahide Study Guide put out by Yeshiva Pirchei Shoshanim.

There is a lot more to this subject than I will have room for in this blog. I am only posting a few points.

Point 1: “Not all commandments from before the giving of the Torah were intended for all people. Some are universal; others are only for the families and descendants of the patriarchs of the Jewish people.”

Point 2: “A few of the Noahide laws are not directly commanded, but are rather implied by the history of God’s relationship with man.”

Point 3: “The giving of the Torah modified many aspects of the original Noahic covenant. Amung the changes it caused, was that it revised the universal quality of many commandments given before Sinai. …God wanted to place specific universal laws clearly under the umbrella of Torah learning and interpretation.”

A few of the Noahide laws are not directly commanded, but are rather implied by the history of God’s relationship with man.

These three points answers the issues I bring up in this blog. From these points we learn that some of the commandments given before Sinai was to the general populous and some given to the family line of Abraham that became the nation of Israel. Then some were not given as direct commands but were implied over time through God’s relationship with man.

All the commandments, 7 for non-Jews and 613 for Israel are under one umbrella of the Torah, spoken by God to Moses and then given to the nation of Israel as a complete package.

These three points are foundational in learning the 7 Noahide Laws. Studying and grounding oneself in these points will assist you as you go deeper into the 7 Laws and the lifestyle they lead you into.

A closing point I want to leave with you as I have meditated on the second point mentioned above.

**Just as some of our commands came from God’s relationship with man, our observance of the laws depends on our relationship with fellow man. One could lock themselves in a room and with no contact with the outside world and keep the 7 laws but they would merit you nothing – their merits comes from human to human contact.

As stated, the 3 points are foundational and only scratches the surface; as you can see the Noahide Laws are not just a list of 1,2,3 commands. They go way deeper than what I wrote here, I hope this inspires you to keep on studying and attach yourself to proper Jewish teacher of the 7 Laws.