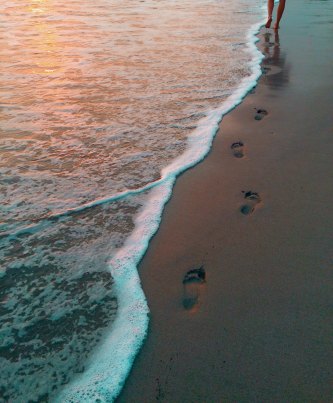 Those that know me know that I have not been well; I have been diagnosised with an attack on the lower part of the brain called the Cerebellum. Hopefully, with rehabilitation I can beat this thing. With the Creator’s guidance I have been directed to the right doctor.

I have spent a lot of time over the past few months in the bed recouping. This has given me a lot of time to meditate on things. Last night was no different.

Psalms 145 has become one of my favorite psalms. Last night I got to praying about how thankful I am to have gone through this. I have known all along that this was a heaven sent condition. Being the busy person that I am, I would not have taken the time to think things out like I have.

Last night as I pondered certain verse of Psalm 145 I asked myself questions that led me to the poem known as ‘Footprints’.

Psalm 145:14
“Hashem/The Creator supports all of fallen ones and straightens all the bent.” Artscroll Tehellim

As I was on the backside of my own personal storm this verse led me to some new insight about the verse of this particular Psalm.

What I saw in this verse is that the Creator never leaves us alone to live out this life; even during the storms of life He is there to help us up and to bring us healing when needed.

A lessen from Psalm 139 that I learned years ago via Rebbi Nachman of Breslov, I learned that even if I myself messes up, that He is near by to call on. And now I see Him never leaving during life’s struggles.

The Creator supports all those who fallen and those who are bent. He never leaves their side.

This encouraging news for those going through a storm of some kind.

Footprints In The Sand – Poem

This bothered me because I noticed
that during the low periods of my life,
when I was suffering from
anguish, sorrow or defeat,
I could see only one set of footprints.
So I said to the Lord,
‘You promised me Lord,
that if I followed you,
you would walk with me always.
But I have noticed that during the most trying periods of my life
there have only been one set of footprints in the sand.
Why, when I needed you most, you have not been there for me?’
The Lord replied,
‘The times when you have seen only one set of footprints in the sand,
is when I carried you.’
-Mary Stevenson

Post script: When I as a non-Christian but a God fearing gentile sees the English word ‘ lord\LORD I try to point to the Creator alone and no other being in the earth or in heavens. As a God fearing person I have no belief in any form of a godhead\God head.

2 thoughts on “Footprints in the sand”